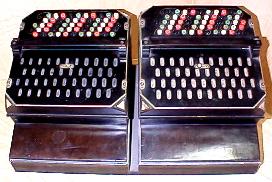 The instrument has  single – action reeds

It is played mounted to a frame or on the lap, in a sitting position (a “knee-bandonion”).

With the thumbs below wooden bars on top.

By pulling up the left and/or right instrument side ,air flows into the bellows.

A special valve system enables a continuous air flow when pumping the left -,right – , or both sides simultaniously.

Tones are produced when pushing buttons and bellows down.