He was a music teacher, musician and publisher.

Band had his instruments made to the order, most probably at Saxony (perhaps by Zimmermann or Uhlig).

Contrary to the Konzertina he later expanded the lay-out by adding more rows of keys instead of lengthening the already existing three rows, like Zimmermann and
Uhlig were doing.

Band`s intention was to simplify the change from a small instrument lay-out to the larger instruments as players improved their musical skills. 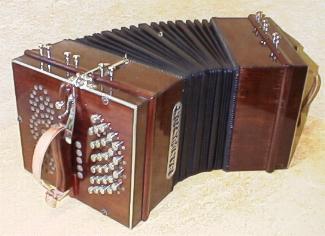 This instrument had already a very complete range containing all the tones of the chromatic scale.

Note the metal “mushroom” shaped register stops on top of the instrument.

A small lever next to the air valve lever, activates a special “tremolando” device giving pulsating effect to the sound by means of a complicated bellow system inside.

It is surprising to see in how short time, the bandonion has developed  in such short time.

(picture below) original Heinrich Band company label, from the carrying case belonging to the bandonion shown above 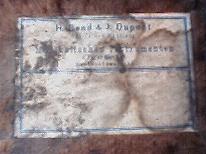 Band improved the sales of musical notes by adding numbers besides, and later over the notes corresponding with the keys at the instruments.

This made the selflearning process of playing easier (most people didn`t have any knowledge of musical notes neither could they pay for a music teacher).

This way of learning bandonion was, and still is very popular in Germany today.

The way the early bandonion/concertina  range was expanded.

I think that the larger lay-outs of these instruments were made in very short time, probably around 1860.

Probably the extention of the konzertina lay-outs went as fast to.